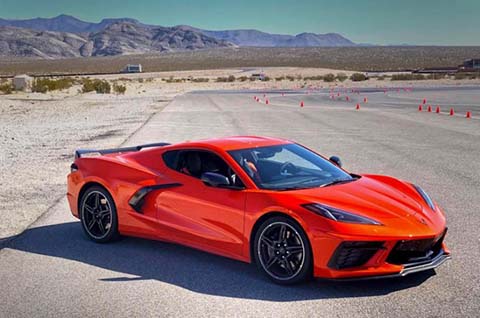 With a touch of the Start button, the big V-8 fires up with a deep and menacing rumble. The new Chevrolet "C8" has finally come to life.

Originally unveiled last July at a splashy even in Southern California, the actual launch of the 2020 Chevrolet Corvette was delayed by months due to the lengthy strike that shut down most of General Motors' North American operations. Production is just ramping up at the factory in Bowling Green, Kentucky, none too soon not only for GM but a long list of anxious buyers. Even before the strike, Chevy had already sold out the first year's production and some buyers will likely now have to wait until 2021 to take delivery.

The automaker pulled a handful of early models off the line this past week to give a select group of journalists a chance to see what the eighth-generation Corvette – the C8, as it's widely known – can do, and why it is betting the two-seat sports car will finally deliver a real challenge to far more expensive "exotics" from the likes of Porsche, Aston Martin and even the vaunted Ferrari.

As has always been the case, the 2020 Chevrolet Corvette boasts plenty of power – as much as 495 horsepower and 470 pound-feet of tire-spinning torque. The new 'Vette can hit 60 in as little as 2.9 seconds. That's barely an eye blink slower than what the ZR1, the special track-ready version of the outgoing seventh-generation sports car could manage, even though it boasted fully 260 more horsepower.

There have been all manner of improvements made to the C8's 6.2-liter V-8, as well as its suspension system. But the most dramatic – and controversial – change sees the Corvette's engine moved from up front, ahead of the driver to midship, immediately behind the cabin. That dramatically changes the weight balance and other factors that translate not only into a much faster launch but significantly improved handling – as the journalists were soon to learn during two days of driving on both public roads and at the Spring Mountain track in Pahrump, Nevada.

Even before the drive, the 2020 Corvette was winning raves – and honors as both the Motor Trend Car of the Year and North American Car of the Year, among other kudos.

That said, it has also generated a fair amount of controversy. Online enthusiast boards lit up with protest over the new design which, by the nature of the new engine layout, is radically different from the Corvettes of yore. Equally provocative was Chevy's decision to forego offering a manual gearbox on the C8, opting instead for the sort of double-clutch automatic transmission, or DCT, found on more and more performance products worldwide.

"I don't think these controversies will last long because the car is so good," said Stephanie Brinley, principal auto analyst with IHS Markit, after driving the new Corvette this week. And the reality, she added, is that almost no one was buying the last-generation sports car with a stick shift, anyway.

The C8 transmission actually can be shifted manually, using steering wheel-mounted paddle shifters, but the new system is so intuitive a human driver can't come close to matching its performance in automatic mode.

The improvements built into the C8 not only make the car faster but also transform it into much more of a daily driver. While the optional Z51 performance package can be as tough on one's kidneys on rough roads, buyers can upgrade to what is technically known as a "magnetorheological suspension" or "MR," where a fluid controlled by a magnet creates a shock absorption effect. The computer-controlled system can switch each of the four individual shock absorbers from soft to firm, or anywhere in-between, in the time it takes the Corvette to travel just 1 inch at 60 miles per hour. On track, it improves cornering. On the street it makes potholes all but vanish.

The new Corvette is available with all-season tires and, for those in the Snowbelt who plan to use it all year, there are even snow tires on the option list. The new sports car also has a feature that lifts the nose up by more than an inch, making it easier to manage steep driveways as well as speed bumps.

All told, critics have hailed the 2020 model as not only the most capable Corvette ever produced but, perhaps more significantly, the first to pose a serious challenge to the likes of the best exotic sports cars from Europe. And, at a base price of $59,995 – including the $1,095 delivery fee –it rings in at a fraction of what competitors like Porsche, never mind Ferrari, command, pointed out analyst Brinley.

"It's important for [Corvette] to be seen as a car you wouldn't have expected from Chevrolet," said Steve Majoros, the bowtie brand's director of marketing.

Chevy is hoping the C8 will be able to gain traction in U.S. markets, such as Southern California and South Florida, where affluent buyers have traditionally opted for high-line imports. It also is looking to gain some real traction overseas. In fact, even though GM has largely abandoned markets like Europe, India and South Africa, the Corvette will be sold through new specialty marketing operations. The C8, in fact, marks the first time Chevy will build a right-hand-drive version of the sports car for countries such as Britain and Australia.

"We're intent on sending the message that we've arrived," said Majoros during an interview after the Corvette media drive.

As good as the new C8 might be, Chevy insiders privately hint they're just beginning. As with Corvettes past, the plan is to roll out the initial version, dubbed Stingray. Even more powerful models will follow over the next three to four years. Whether they will follow the same model strategy as before, with names like Z06 and ZR1, isn't clear. But, much like Porsche does with its classic 911, each new Corvette variant will become faster and even more adept on track, never mind the street.

And, despite those early controversies, Chevy is so confident about the success of the C8 it already is planning to add a second shift at the Bowling Green factory to meet the anticipated demand.