Driving the Pontiac prototype that inspired the Stingray 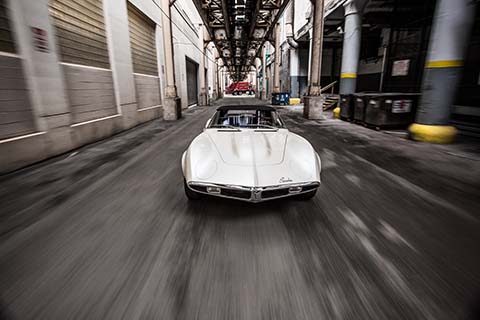 Cruising along Chicago streets in this stunning Pontiac sports car and looking over a front-end landscape so curvaceous it could wear a Prancing Horse badge, I find it impossible to imagine that any automotive executive would think this prototype was a bad idea. But that's just what happened in 1966 to the XP-833, a car so admired inside General Motors that the people who created it could not obey the order to destroy it. In a town full of "could have been" stories, the Pontiac XP-833 stands out as one of the most gut-wrenching. After decades of admiring it, I'm actually behind the wheel. 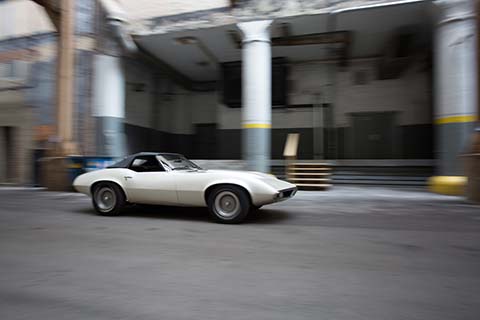 It's only fitting that the man to thank for this flash of brilliance was John Z. DeLorean. In the early '60s, DeLorean cut a swath through GM as the chief engineer of Pontiac. He famously invented the GTO, launching the muscle-car era, and was a renegade within staid GM. He got results, could be utterly charming, and had an eye for talented people to strengthen his team. DeLorean had his sights on a Pontiac sports car for the 1966 model year, which might seem like a great idea but was basically a suicide mission within GM. The Corvette, after all, was GM's favorite child, not to be threatened by an internal rival. But DeLorean was nothing if not driven.

The idea of the XP sprang from GM's design department, where there were often undeveloped concepts on drawing boards. DeLorean actually had some competition for the XP, because Oldsmobile chief engineer John Beltz was also interested. Ray Koenig, who worked in the design studio back then, witnessed an exchange between the two chief engineers. "Both of them wanted to one day run GM," Koenig remembers. "And both wanted the XP. Early one morning in about late 1963, they were in the design department discussing the parameters of the car. After about a half-hour, Beltz told DeLorean he could have it. He knew DeLorean was going to have an uphill battle with the top brass."

DeLorean enlisted a team of Pontiac engineers to create a design brief that fleshed out the idea. This was a juicy assignment for Bill Collins, one of the engineers who worked on the project. "We were all hot to do a sports car," Collins recalls. The early sketches were a knockout, but the challenge was making sure the car could be sold for far less than the $4,300 Corvette and therefore be attainable to a younger generation. "Roughly 70 percent of the chassis' functional components," says Collins, "were from existing GM cars." 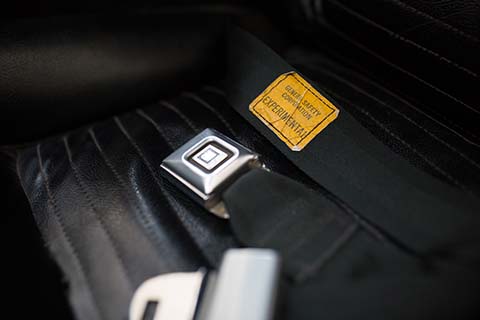 In 1964, DeLorean and Collins met with GM president Ed Cole and chairman James Roche at the General Motors Building in Detroit and showed them what's known as a presentation booklet. This booklet laid out the case for the car, with design sketches and cost estimates. Despite being smaller and aimed at a much lower price point than the Corvette, the XP got a cool reception. DeLorean, ever the salesman, staved off a hard "no" by promising to return with functional prototypes that, he claimed, would bolster his case. Anticipating that Cole and Roche would tell him not to bother building the prototypes,

DeLorean claimed the models were already built when, in fact, they were not. Collins and DeLorean left the meeting and the race to build the cars was on. DeLorean commissioned two cars: SP-5, with a removable hard-top, and SP-6, with a folding soft top. While the mechanicals, from the straight-six in the hardtop to the proposed V-8 in the soft-top, were nearly all from GM parts bins, the fiberglass body came from Dow Corning. Other than the rear trunk lid, which was hinged at both ends to accept the folding top and cargo, and the movable pedals, the XP was not a technological tour de force. Its beauty was in the design, a wonderfully constrained and handsome shape that arose after more than 1,000 sketches were rejected.

These prototypes were not the typical styling bucks held up by paper clips, but rather fully functioning cars that were feasible for production. Collins and DeLorean extensively tested and tuned them for the final presentation to the GM board. 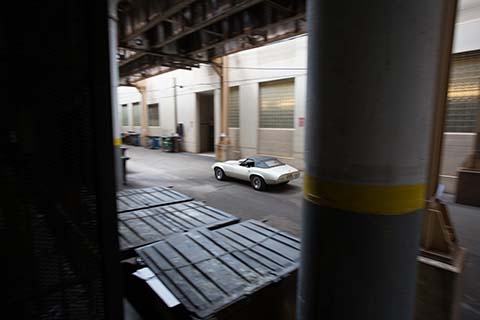 That meeting was held on February 23, 1966. By this time, DeLorean had been promoted to general manager of Pontiac, which gave him slightly more influence with the board. He and his team had a compelling list of attributes and market research to go along with the prototypes. DeLorean's "sell" was that the XP would compete with the Mustang and not the Corvette, quite a stretch considering the Mustang's rear seats. Furthermore, if DeLorean chose to make the 389 Tri-Power V-8 optional, the XP would have had 360 horsepower – in a car that weighed just 2,500 pounds. In 1966, the strongest Corvette had 425 horsepower and weighed 3,000 pounds, with a big-block lump over the front wheels. It doesn't take a genius to figure out which of the two cars would have been faster and handled better.

In a move everyone except DeLorean saw coming, the GM board killed the XP-833. That would have been the end of the story if it wasn't for Collins and Pontiac master mechanic Bill Killen. The pair knew the fate of discarded prototypes – the crusher – so they stored the XP-833 duo in sealed shipping crates where Collins said they would be "out of sight and out of mind." Years later, in 1974, Killen asked Collins: "When are we going to get rid of these cars?" Working through the GM Purchasing Department, Killen acquired SP-5 and Collins took home SP-6. (SP-1 through SP-4 were mock-ups, not drivable prototypes.) 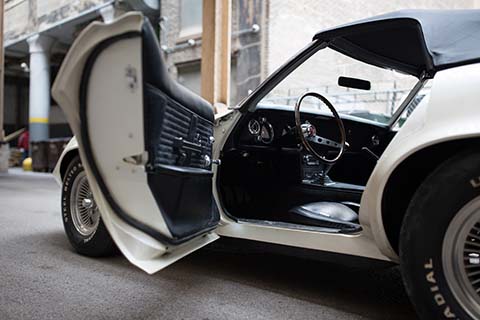 As the XP-833 pair was about to leave the Tech Center, Collins was over at Design Staff and found some Banshee nameplates, which, he says, "were at one time used on the XP-798 show car." As Collins explains, "I installed them and eventually they [the XP-833s] became Banshees," a name never applied to the two sports cars when they were under development or being considered for production.

It wasn't long before Chicago-based dream car hunter and historian Joe Bortz heard about the SP-6 XP-833 and gave Bill Collins a call. Collins demurred, but the ever-persistent Bortz stayed in touch. Finally, Collins came around in 1988 and invited Bortz to his Michigan home to see the car. Bortz met Collins for breakfast the very next day.

"When I finally see the car," says Bortz, "it's fantastic and I'm in love." The car still wore its original white paint. It also wore the 1970s alloy wheels and louder mufflers that Collins added. The two men soon did their deal, and a very happy Bortz left Michigan with the XP-833 in his trailer.

In the 29 years since he's had the car, Bortz has cleaned it thoroughly and had it repainted in the original color. He's also shown it a few times, and it always draws a crowd. 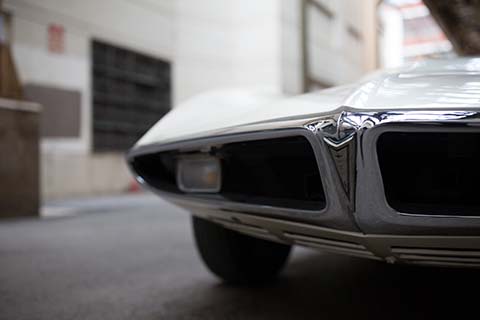 Unlike many concept cars, the XP-833 is a real runner. It's hard to imagine that this is a prototype and one of only two. Fortunately, the other car, SP-5, still exists, safe in the hands of Connecticut car dealer Lenny Napoli, who has barely driven it. Bortz, on the other hand, has driven his V-8 roadster from Highland Park, Illinois, to Milwaukee and back.

Take a good look at the XP-833 today and you see elements used in many GM cars. The oval headlamp doors – behind which there were never any headlights – evoke the Opel GT, the fender lines suggest the 1968 Corvette, the hardtop's roof boasts a side profile similar to that of a Stingray, and the taillights clearly influenced the rear-end design of 1967-and-later Firebirds and GTOs. Look more closely and you'll see hints of other GM cars lurking just beneath the surface. 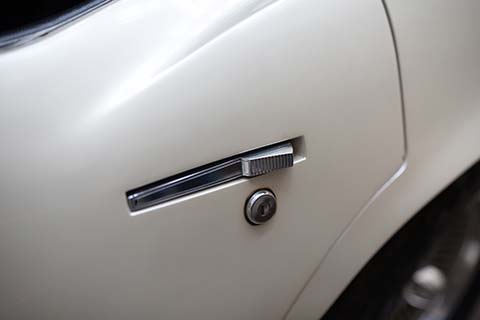 But the most important thing that lurks beneath the surface of the white XP-833 convertible is the 326-cid V-8. It starts easily and idles with a healthy burble from the exhaust system Collins added. The transmission slips into gear easily and SP-6 moves out briskly, as you'd expect from a little car packing 250 horsepower. Since this is a priceless prototype, I'm not going to push it, but clearly it is very fast. It would have been even faster with the 389, which Collins is sure DeLorean would have offered had the car gone into production. Although Collins never commuted in the XP-833, he drove it quite a bit during the 1970s and '80s, and he still thinks about it a lot. Does he regret selling the car almost 30 years ago? One look at the wistful expression on his face tells the story.

This article was first published in Hagerty Drivers Club magazine