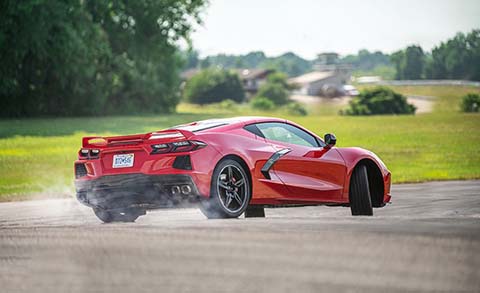 Chevrolet's mid-engine Corvette sports car has been widely touted as a performance bargain since it launched for the 202o model year, when GM set the entry price of $59,995. Starting March 1, the 10Best award-winning C8 Corvette will carry a base price of $60,995, an increase of $1000.

The new pricing was first reported by Motor1. Chevrolet confirmed the increase in price to Car and Driver, but the company wouldn't comment on the reason for the hike.

"We monitor and adjust pricing on all our products regularly, and we’re confident the Corvette remains a winning formula of performance and attainability," a Chevy spokesperson told C/D.

Fair enough. Midyear pricing changes aren't uncommon in the automotive industry, particularly due to fluctuations in the price of supplier parts or in light of parts shortages. The Corvette's increase in price could be linked to a recent shortage of microchips, or it could simply be an attempt to squeeze a little extra profit from the Corvette lineup.

Either way, the base 1LT model isn't the only version of the Corvette to have its price increased. Chevrolet confirmed that the midrange 2LT and top 3LT models both receive the same $1000 price increase, raising their MSRPs to $68,295 and $72,945 respectively. The price increase also applies to all convertible variants of the Corvette.