From the archives: Unique among American cars – and among sports cars 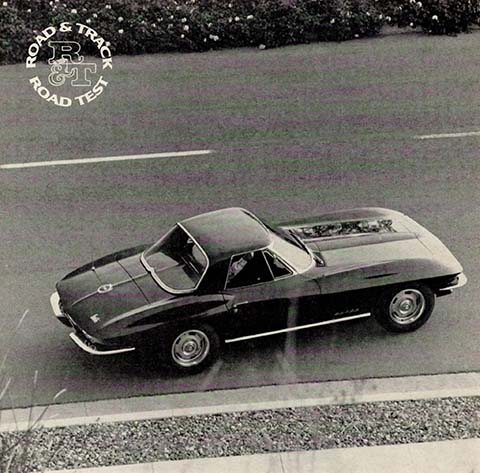 The Sting Ray is in its fifth and probably last year with that name and body style, and it finally looks the way we thought it should have in the first place. All the funny business – the fake vents, extraneous emblems and simulated-something-or-other wheel covers – is gone, and though some consider the basic shape overstyled, it looks more like a finished product now.

Actually, the car has undergone few changes in its 5-year run. The suspension and sound deadening were refined in the 2nd year, disc brakes introduced in the 3rd and the needlessly large "porcupine" engine added as an option in 1966. Minor refinements have been made all along; sales have risen gradually each year. And it remains unique among American cars – and among sports cars.

This story originally appeared in the February 1967 issue of Road & Track. 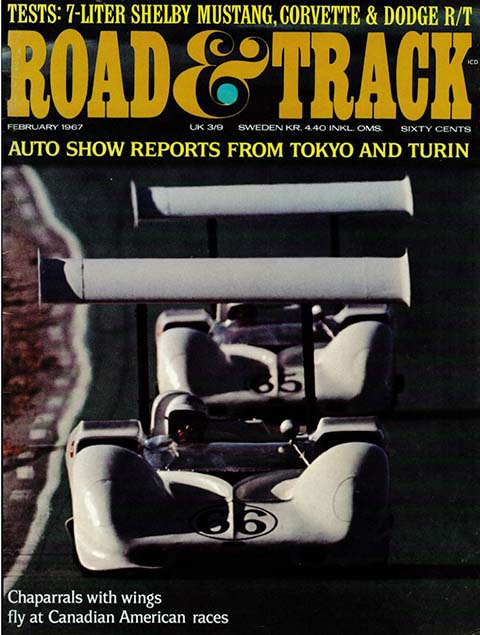 For this test we selected an almost basic version of the Corvette: a convertible hardtop with the standard 300-bhp 327 engine, 4-speed gearbox and power assists. With the exception of the power assists, we concluded that this is the Corvette for the thinking driver.

The test car was certainly impressive looking. Its paint was better than on any Corvette we've tested, a deep claret red. Its restrained trim and the new wide-rim (6 in.) wheels gave it a purposeful, almost elegant look.

Performance can be taken for granted with over 5 liters and 300 bhp in a 3160-lb car. It is a credit to the American way of doing things that the performance is achieved in a remarkably silent, smooth and economical manner. Our test car had the optional 4-speed gearbox, which is smooth, quiet and easy shifting (the linkage has been isolated from the vibration that was an annoyance in earlier models); but now that the standard 3-speed has been redesigned and includes a synchronized 1st, we can see no good reason for ordering the 4-speed for general use. Other than the ease of reselling, that is. 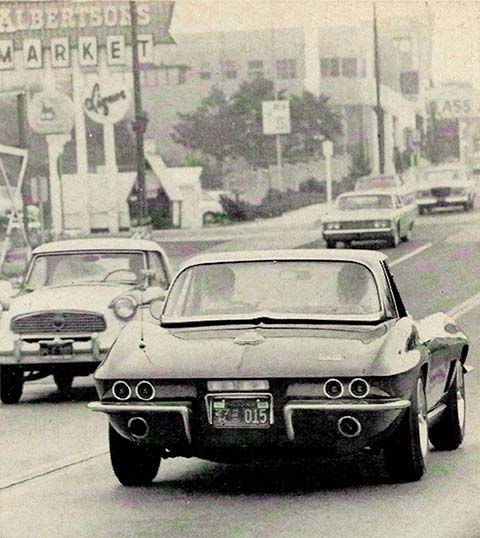 The only thing that marred the flexibility of performance in our test car was the unwillingness of its engine to return to idle speed. For one thing, its throttle linkage was a bit sticky; but more basic than that is the fact that the anti-backfire valve used with emission-controlling air injection dumps a blob of fresh air into the intake manifold for about 2 sec after the foot is lifted, causing the engine to hesitate momentarily at 1200 rpm on its way down to the normal 500-rpm idle speed. Minor, but bothersome, for California customers.

It's hard to find fault with the Corvette's handling; it's as near neutral as any car we know and of course there's always enough torque available to steer with the throttle. It is quite stable directionally in a cross wind and imparts an immense feeling of security out on the open road. Steering effort with the standard 20.2:1 overall ratio is moderate, and the customer may have the ratio lowered to 17.6:1 by a simple repositioning of the steering linkage and resetting of the toe-in, if he's willing to accept parking efforts in the Armstrong category.

Our test car, however, was equipped with the optional linkage power steering; and in our opinion this system is unacceptable. Like other GM power steering it is set to begin assisting the driver only after he has exerted a pre-set amount of force at the wheel rim. On the Corvette, this takeover-point apparently has been raised – most likely to give more "feel." But the result is almost the opposite. The wheel takes an almost constant amount of effort (about 7 lb) for any maneuver. Corvette is the last GM car to retain linkage-assist power steering and it's reasonable to predict that next year it will have the integral unit used on other GM models – and hopefully with more accuracy.

Over smooth roads the Corvette has a pleasing, almost big-car ride. Noise level is low from most sources, and thus this is a car for long-distance travel. Its effective heater, excellent AM/FM radio and good weather protection (regardless of top ordered) place it near the top of the list of sports/GT cars for pure comfort. On rough roads the ride deteriorates as the progressive-rate springs, limited wheel travel and willowy body structure combine to put up quite a fuss. Under these conditions it is no match for the best European examples, like the Mercedes 230 SL or BMW 2000 CS. But then this is More Car for the Money, and perhaps it is unrealistic to expect ultra-sophisticated chassis design. In all fairness, however, this is America's best chassis. 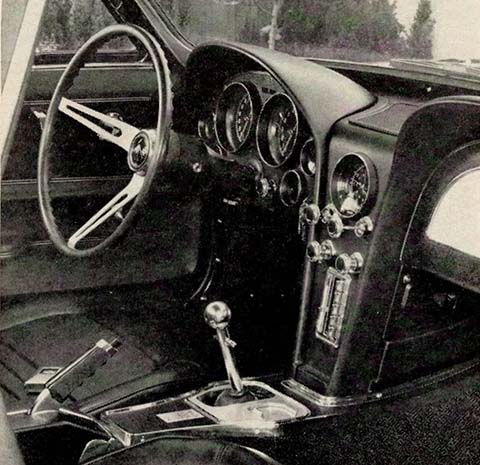 The Corvette's interior abounds with niceties. There are a handy new center-mounted handbrake, seat-belt hooks that solve the problem of where to stow them, large, readable instruments and handy controls. Materials are nice but not extravagant, and if the whole effect is one of overstyling, at least the layout is logical and comfortable. An adjustable steering column is optional, and seat backs can be adjusted over a small range with a screwdriver and wrench. New seat-back locks keep them upright until they're released for access to the adequate, but awkward, luggage area behind. 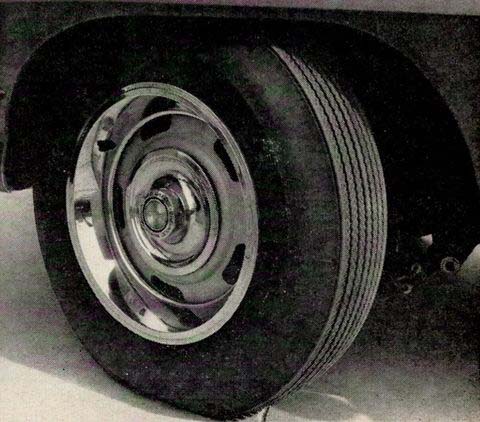 Disc brakes on all four wheels are powerful, smooth and consistent. Constant contact of the pads with the discs permits a very small travel of the caliper cylinders and thus allows a large mechanical advantage in the actuating circuit: because of this the Corvette is the only production car over 3000 lb with four discs that can get by without power brake assist. And though our test car's power assist gave adequate feel, we consider this item to be unnecessary. Fade characteristics of these Delco-Moraine brakes are excellent, but their ultimate stopping capability is limited to 24 ft/sec/sec or 0.75-g by tire adhesion. The front brakes locked consistently and evenly at this deceleration rate. Squeal prevails when the discs are cool. Parking brake actuation is by small drum units built into the rear discs; in our experience this arrangement works well, but poor adjustment on the test car limited its holding power to about 10% grades.

One unwelcome change from earlier Sting Rays is the amount of engine fan noise in the current model. Apparently nothing has been changed but the shape of the fan shroud, but the fan even with its viscous drive is a veritable windmill all the time. Perhaps the change has achieved the greater air flow needed with the air injection smog pump to provide adequate cooling under idling conditions. 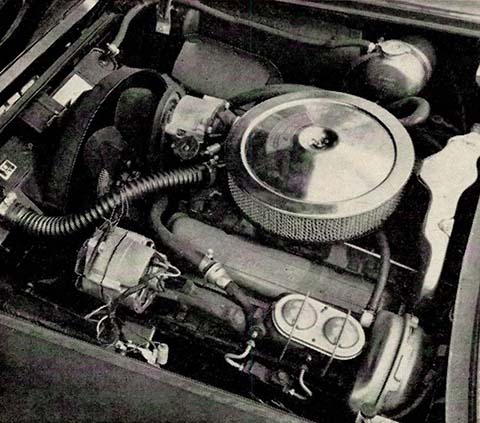 All things considered, the Sting Ray is a big value for the money. It matches any of its European competition for useful performance and walks away from most of them; it's quiet, luxurious and comfortable under ordinary conditions; easy to tune and maintain; and even easy on fuel if its performance isn't indulged too often. Quality of assembly is lacking, however, and the following items were amiss on our test car: several rattles; improper clutch adjustment; an air leak over the windshield; choke setting; sticky throttle linkage; and a fresh-air vent that wouldn't shut off.

The improvements we would most wish for in the next Corvette series would be lighter weight, improved body structure and quality control, and a better ride on poor surfaces. But in the meantime the Corvette ranks with the best sports/GT cars the world has to offer, regardless of price. It is significant to note that with the power assists omitted, the Corvette tested can be bought (through the normal haggling process) for approximately $4000. 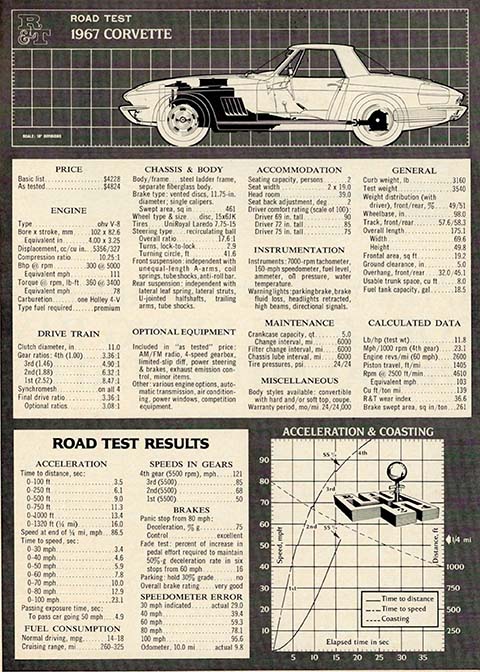