Explainer: 2023 Chevrolet Corvette Z06's Engine is All About Breathing and Revving 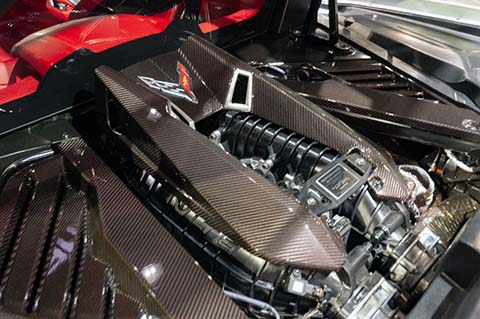 The 2023 Chevrolet Corvette Z06 features the most powerful naturally-aspirated V-8 ever put in a production car. This video from Chevy explains how engineers accomplished that.

A naturally-aspirated engine provides a purer driving experience, and aligns the Z06 road car more closely with the Corvette C8.R race car. But the new engine, codenamed LT6, also had to make more horsepower than the C7 Corvette Z06's 6.2-liter V-8 despite less displacement and the lack of that engine's supercharger. The solution was a freer-breathing, higher-revving engine.

The LT6 features dual overhead camshafts and a flat-plane crankshaft. We've seen the latter in various Ferrari engines and the Voodoo V-8 used in the last Ford Shelby GT350 Mustang, but never in a Corvette. Thanks to smaller, lighter rotating parts, this design has less inertia than a traditional cross-plane crankshaft, which allows the engine to rev more easily. It also sounds like no other General Motors V-8, with a high-pitched wail that's more supercar than sports car.

The flat-plane crank allows the LT6 to rev to 8,600 rpm, and was also designed to work with tuning valves in the intake manifold that optimize the amount of air flowing in. The intake system also exploits a phenomenon called Helmholtz resonance to increase volumetric efficiency and broaden the torque curve.

We'll find out for sure later this year. Z06 production is scheduled to start later this summer at the same Bowling Green, Kentucky, factory that builds other Corvette variants. The LT6 engine will be built at the Performance Build Center located at the same site. The 2023 Z06 will be offered as both a coupe and convertible, the latter offering a great opportunity to hear the LT6's characteristic wail.