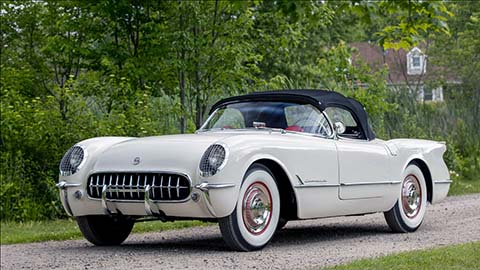 The Chevy Corvette was the brainchild of Harley J. Earl, head of GM's Art and Color section, the US auto industry's first in-house styling department. Earl designed a few one-off specials as styling concepts, and was hungry to build a sports car. Many of the US servicemen who had served in the European theater in World War II had become enamored of the small British roadsters, particularly the MG TC. Earl believed he could build a sleek American roadster to rival the best Europe had to offer. Within the walls of GM it was known as Project Opel. 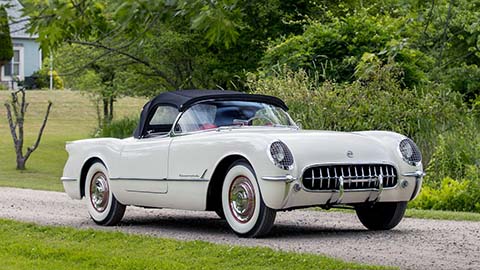 The Chevy Corvette would have a near 50/50 weight distribution for ideal handling. The wheelbase was 102 inches, much like the Jaguar XK-120. The track would be 57 inches in front, 59 inches in the rear. The windshield would be the wraparound type, with thirteen chrome "teeth" in the oval grille, and the rear license plate would reside in a shadowbox enclosure. The body would be made of GRP, or glass-reinforced plastic (aka fiberglass). This would be General Motors' first venture in the fiberglass world. 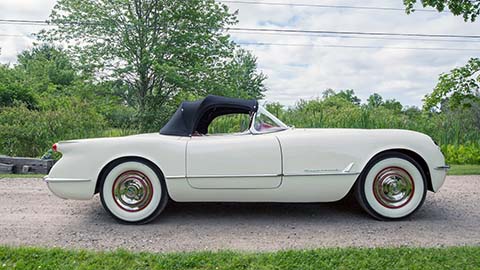 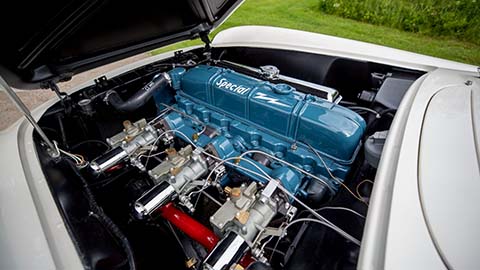 Chevy Corvette production for 1953 would total 300 units, all in Polo White over Sportsman Red vinyl interiors with black convertible tops. There were only two options: a heater and an AM signal-seeking radio. All three hundred cars got the radio and heater, so they weren't options in the traditional sense, even if they were listed that way on window stickers.

Production of the Chevy Corvette was already approved when it was shown at the 1953 General Motors Motorama at New York City's Waldorf-Astoria hotel. However, the strong reception to the new "concept" helped reinforce the concept. 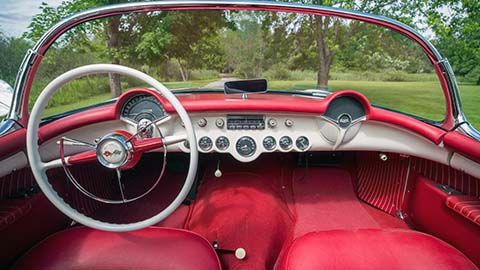 The first Chevy Corvettes were built in an old building on Van Slyke Avenue in Flint, Michigan. As assembly employees were unaccustomed to working with GRP, production was stymied by raw finishes, uneven gaps, doors with different lengths on the same car, and so on. Almost every Corvette built had to have some level of final finish performed at dealerships. Production would shift to the St. Louis Corvette assembly plant in late December, 1953. 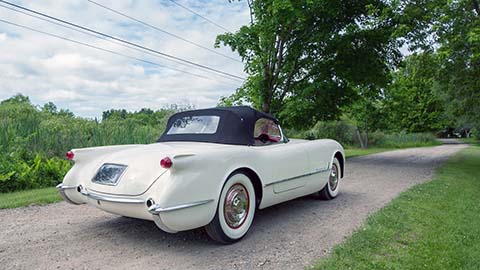 In addition to the fiberglass body issues, the Chevy Corvette was a mixed bag of bare-bones roadster and luxury runabout. Headlights were recessed with chrome mesh stone guards, the convertible top was hidden by a slick flush-fitting body cover when lowered, and the grille was a sparkling smile. In contrast, there were no exterior door handles, forcing one to reach inside the car to open the doors, sliding side glass in clip-in chrome frames was used instead of traditional roll-up windows, and the two-speed slushbox transmission was far from sporty. Early cars even lacked outside rear view mirrors. 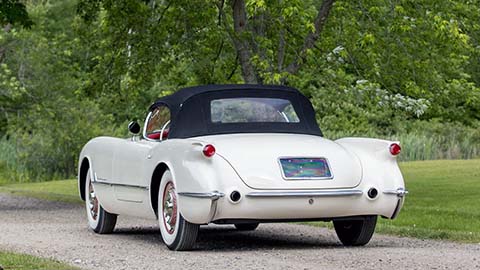 Though sports car purists were not immediately impressed by the lack of a manual transmission or the faux knock-off spinners on the hubcaps, the automotive press had praise for the new Chevy Corvette. Walt Woron wrote in Motor Trend magazine, "Chevrolet has produced a bucket-seat roadster that will hold its own with Europe's best, short of actual competition and a few imports that cost three times as much." 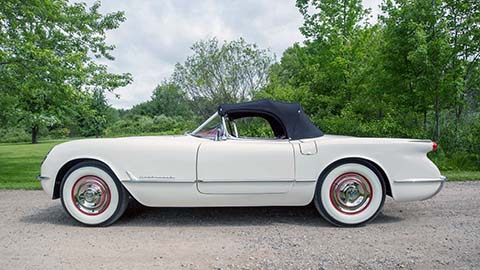 Our feature 1953 Chevy Corvette is number 202 of 300. It was the subject of a painstaking restoration using mostly original parts, completed last year by Irvin Patrick of Paintsville, Kentucky. The Corvette has been driven fewer than six miles since completion. The car was originally built in Flint, Michigan on November 9th, 1953.

The Chevy Corvette retains its original Blue Flame Six engine and Powerglide automatic transmission, and is finished in its original Polo White over Sportsman Red vinyl interior. It is equipped with an AM signal-seeking radio, heater, tachometer, speedometer, and clock. The side glass curtains are included in the sale. 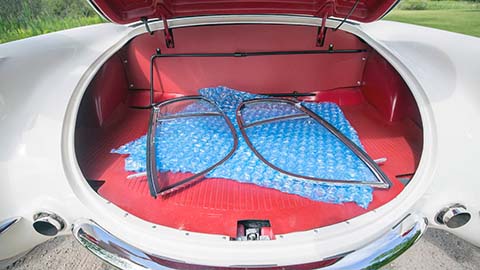 This first-year Chevy Corvette will cross the Mecum Auctions block at their Harrisburg, Pennsylvania event taking place July 27th through the 30th. 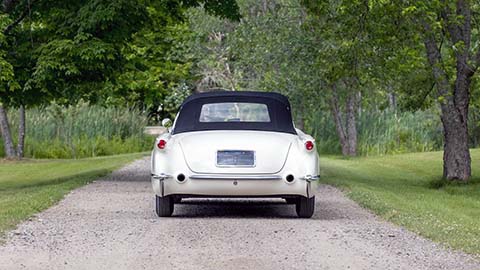 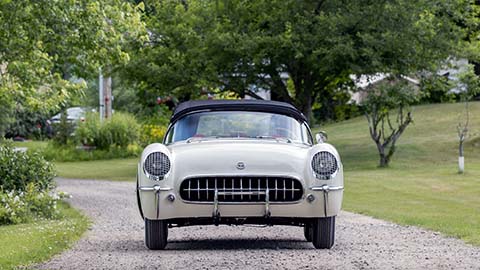 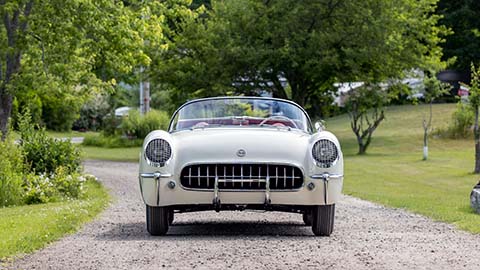 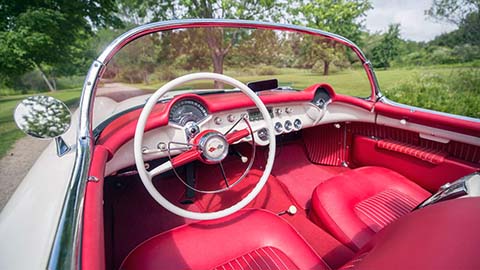 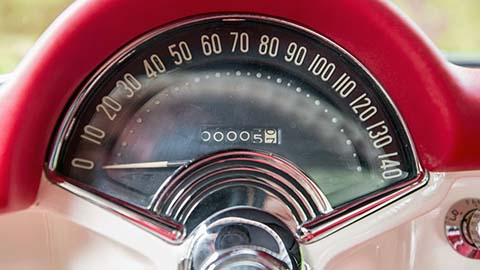 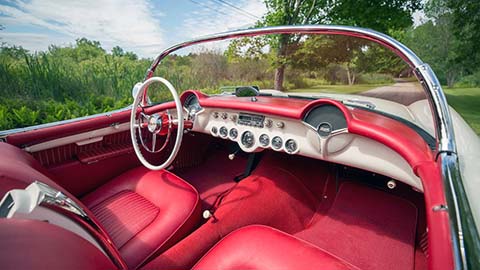 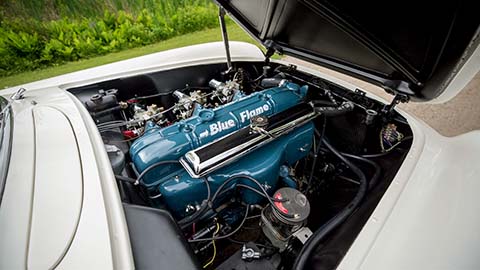