The link between the Chevrolet Corvette and Nasa's Apollo Moon missions can't be ignored. Through a stroke of genius marketing, Chevrolet forever linked the two American icons by leasing Corvettes to astronauts for $1. Chevy wasn't allowed to give them for free, so this did the trick in connecting Corvettes and space travel in our minds forever. One of these red, white, and blue striped Apollo Corvettes was discovered rotting in a field and is now getting restored. Should we call this barn find a "field find?" Whatever you want to call it, it is cool, rare, and a deeply significant part of American history.

One of the few remaining astronaut Corvettes | CollectSPACE

Did Nasa really give astronauts Corvettes?

GM wasn't allowed to give government employees free cars, so it leased Corvettes to all astronauts who worked on the lunar missions. Although this practice continued for quite some time, only six got painted with the red, white, and blue livery. This white C3 Corvette, originally leased to astronaut Al Worden, sports the exceptionally rare livery.

According to The Drive, besides having cool taste in cars, Al Worden was the command module pilot on the fourth lunar mission. Worden died in 2020. The car, formerly owned by a collector, sat untouched and exposed to the elements for years before Worden's grandson, Will Penczak, got a hold of the rotting piece of American history.

What happened to the Lunar Mission Corvettes? 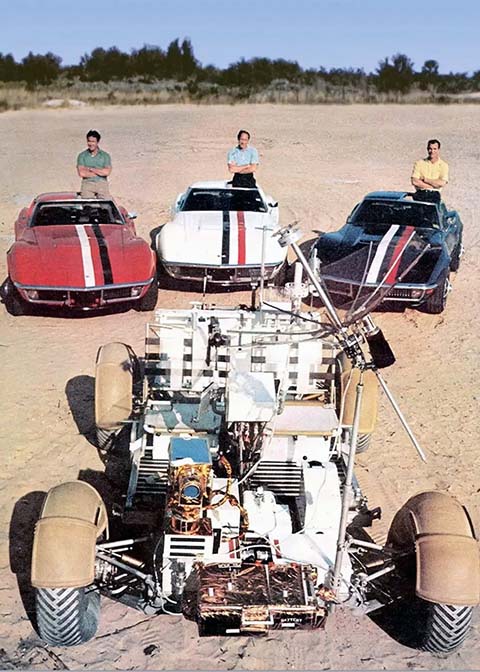 GM handed out Corvettes like candy to astronauts. The idea was to create this association between one of the coolest, most exciting, and terrifying jobs to the American sports car of the day, the Chevrolet Corvette. However, only six of these special liveried Corvettes got made. Of those six, The Drive reports that only three still exist.

Penczak didn't acquire this family heirloom on his own. He teamed up with Luna Replicas proprietor Max Kaiserman. Kaiserman states, "it can't be preserved in its current state due to neglect and its continuing deterioration." Another cool fact about this story is the same collector who sold Penczak and Kaiserman the white C3 Corvette also owns the blue one from the same mission.

What is going to happen to the lunar Corvette now?

Speaking to collectSPACE, Penczak said the vehicle is a "unique preservation of what we deem as a very important part of American history." Of course, he also mentions the car's significance to his family and their history.

Despite its historical value, the current condition of the Corvette is rough. So rough, in fact, that they estimate the restoration cost to be somewhere between $150,000-$200,000. It will not only need plenty of mechanical work and virtually all rubber and plastic components replaced, but its fiberglass body will also need a good deal of attention.

The partners hope to do some public fundraising and also openly seek corporate sponsorship to help with the high restoration costs.

Once the Corvette is restored, the plan is to drive the Corvette a total of 250,000 miles (the distance from Earth to the Moon) around America to share the car and its history with our country.

The team has no finish date set, but updates have so far been found on the collectSPACE Facebook page.