If GM's current rumored plans bear out, we'll get one more generation of the mid-engined Corvette before everything goes electric. 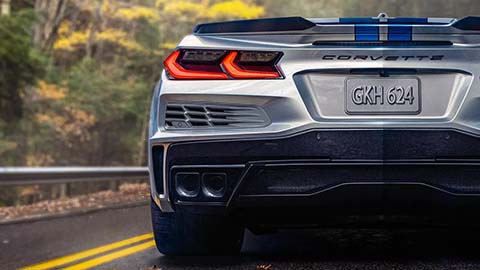 General Motors has been building C8 Corvettes for just about three years now. I know, the passage of time is downright insulting. Either way, with the first mid-engine 'Vette fast approaching the halfway point of its lifecycle, we're not only going to be seeing further evolutions of the formula, like the hybrid, all-wheel-drive E-Ray and long-rumored Zora. Talk of a successor is bound to get louder, too.

In fact, that conversation has already started, thanks to our friends at GM Authority. They tell us that the C9 Corvette is targeting a 2028 release as a 2029 model-year machine. Moreover, it'll keep an internal-combustion engine in some form, meaning that the sports car's gas-burning days won't fade out with the C8. That makes sense — GM is pouring hundreds of millions of dollars into new small-block V8s, after all.

Do note that the C9 is not to be confused with GM's line of Corvette-branded EVs, which will reportedly include a sedan and performance-minded crossover. From GM Authority's article:

According to GM Authority sources, the next-generation C9 Corvette will debut during the 2028 calendar year for the 2029 model year. Under the skin, it will ride on a revised variant of the GM Y2 platform that underpins the current C8 Corvette, with production expected to continue at the GM Bowling Green plant in Kentucky.

Critically, the next-generation C9 Corvette will feature internal combustion for motivation, and will not be directly related to the upcoming Corvette EV sedan and Corvette EV crossover currently in development. As GM Authority covered previously, The General is now hammering away on several new all-electric models set to bear the Corvette nameplate, which will battle rivals like the Tesla Model S and Porsche Taycan, among others.

Those Corvette EVs will not ride on Y2 underpinnings but rather GM's next-generation BEV Prime architecture. Prime is intended to be more, well, premium than the company's other hardware, and as such will also likely find its way into Cadillac and Buick's families.

The C9 generation continuing on Y2-derived bones means the Corvette is a pretty safe bet to remain mid-engined. Of course, you'd have expected as much if the Corvette was keeping its ICE powertrain in the first place. But just as an amusing thought exercise, how hilarious would it be if GM put the motor in front of the driver again after decades of waffling leading up to the C8? Awful, obviously, but also really damn funny.

It's a good thing automakers have no sense of humor. They do have a habit of adjusting their plans, though. If the C9 is really five years away, there's certainly enough time for GM to cool off on the prospect of a whole new ICE generation, so stay tuned.